Just got back from an amazing family vacation up to Alaska (cruise ship from Vancouver to Seward).  Was very cool seeing little write ups on the Alaskan Pipeline around the different coastal towns where our ship stopped.  We never made it to see the actual line, but I learned a few things all the same.

Some of the bits of info I ran across - photo with text written underneath in case it is ineligible. 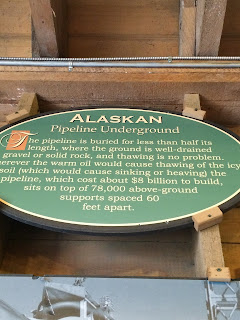 Alaskan Pipeline Underground.  The pipeline is buried for less than half of its length, where the ground is well drained gravel or solid rock, and thawing is no problem.  Wherever the warm oil would cause thawing of the icy soil (which would cause sinking or heaving) the pipeline, which cost about $8 billion to build, sits on top of 78,000 above-ground supports spaced 60 feet apart. 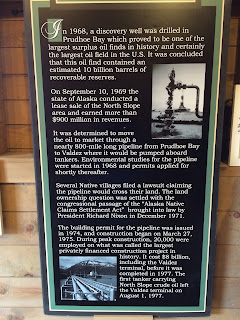 In 1968, a discovery well was drilled into Prudhoe Bay which proved to be one of the largest surplus oil finds in history and certainly the largest oil field in the US. It was concluded that this oil field contained an estimated 10 billion barrels of recoverable reserves.

On September 10, 1969 the state of Alaska conducted a lease sale of the North Slope area and earned more than $900 million in revenues.  It was determined to move the oil to market through a nearly 800 mile long pipeline from Prudhoe Bay to Valdez where it would be pumped aboard tankers.  Environmental studies for the pipeline were started in 1968 and permits applied for shortly thereafter.

Several Native villages filed a lawsuit claiming the pipeline would cross their land.  The land ownership question was settled with the congressional passage of the "Alaskan Native Claim Settlement Act" brought into law by President Richard Nixon in December 1971.

The building permit for the pipeline was issued in 1974 and construction began on March 27, 1975.  During peak construction, 20,000 were employed on what was the largest privately financed construction project in history.  It cost $8 billion, including the Valdez terminal, before it was completed in 1977.  The first tanker carrying North Slope crude oil left the Valdez terminal on August 1, 1977. 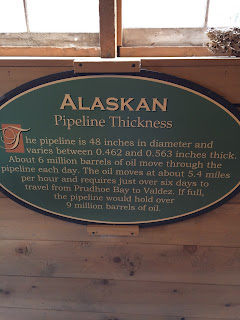 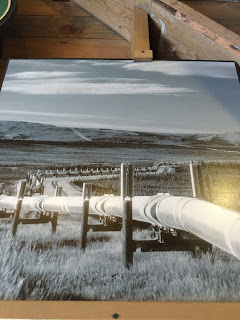