In a recent discussion with a past Raychem employee though linked-in, I heard (for the first time) that there had once been a Raychem Technical Library.  The idea was fascinating to me!  There must have been stacks and stacks of interesting papers and technical information about these products!  In any case, that got me thinking that we actually have a miniature Raychem Technical Library here at JSI.  With Raychem experience dating back to the late 1970's, we've probably amassed one of the largest collections of Raychem related papers and information in the world.  I thought I'd start getting some of that online (nothing confidential of course) so that others might be able to share in the knowledge.

First up is an article and case history of a job in Bakersfield California in 1976.  Below is some of the text that was in a publication called Pipe Line Industry - May 1976 edition.  I'm afraid there is no author listed - please note - everything written below was not written by me and I do not know who to properly attribute the writing to. 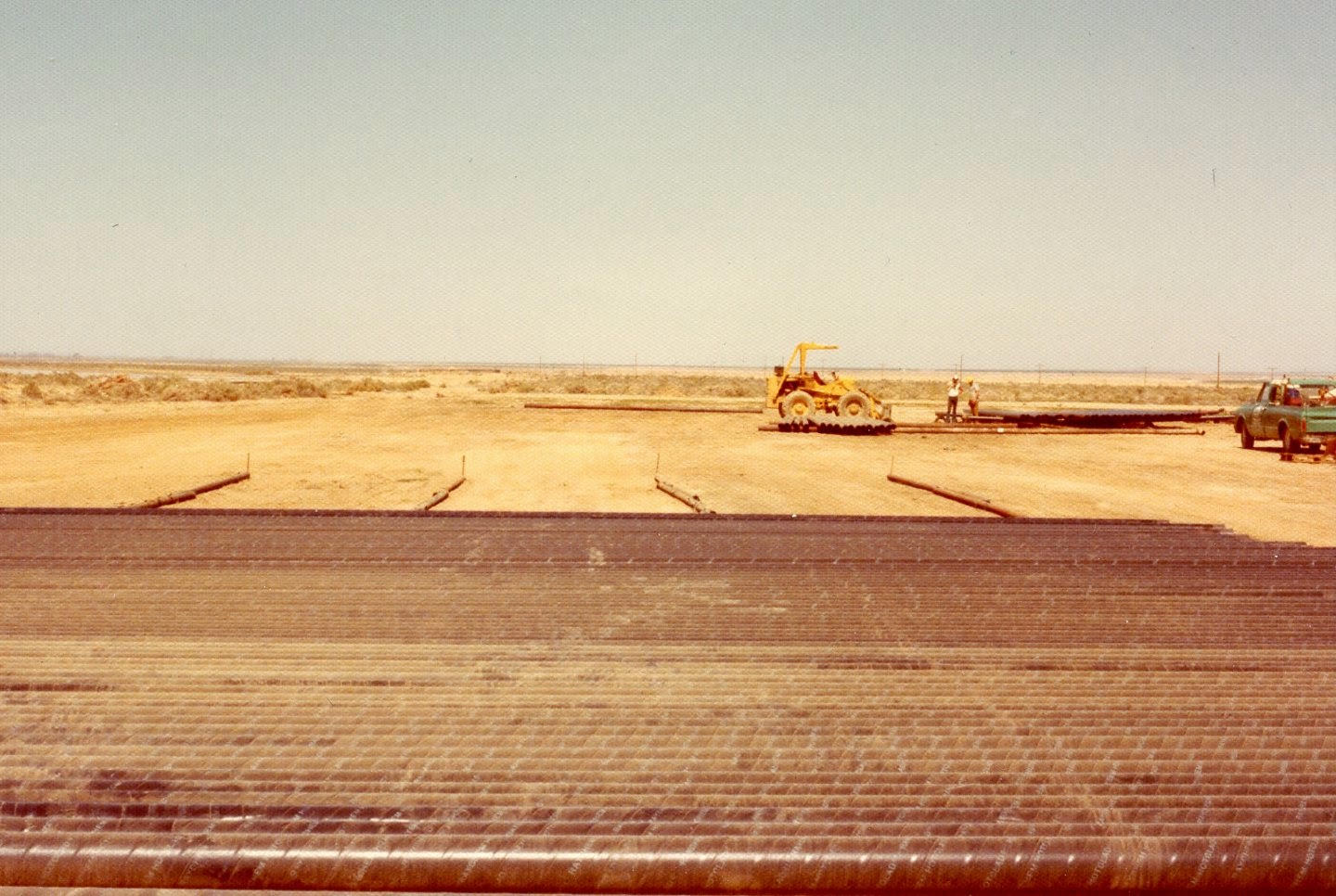 ﻿
A new pipeline supplying hot fuel oil to fire generating plant boilers in the Belridge Oil Co. field in California's southern San Joaquin Valley is wrapped with a special tape to protect the system against severe corrosion.
The tape is a product of Raychem Corp. and is designed for use on pipe lines operating at temperatures above 60C.  The fuel line, carrying produced crude to the boilers, operates at 82C to 99C to maintain fluidity of the heavy oil.  Other coatings and wrappings were examined but could not provide both corrosion protection and soil anchoring at the high operating temperature of the line.
The Belridge field contains some 2,500 wells and the area is criss-crossed with miles of gathering, service and flow lines as well as electrical conduit and steam injection lines.  Some have been in place for up to 50 years but due to lower operating temperatures of the oil lines or the very high temperature of the steam injection system, none have ben greatly affected by corrosion.

With no effective coating or wrapping materials available, the former fuel oil line was laid bare.

Six months after it began service in January 1975, the first leak appeared.  Others followed quickly and in such numbers that it soon became obvious that the entire system would have to be replaced.  By April 1976, the condition of the line had deteriorated to the point where crewes were practically patching patches.  Construction of the new fuel line was pushed in hopes that it would be completed before the old one became unusable.
Studies to determine the cause of the rapid deterioration of the previous pipe line indicated that the rapid corrosion was due to the high operating temperature, an extremely corrosive soil and moisture driven away from the steam line.  The other lines were cool enough for conventional coatings and wrappings to provide protection.

The original and replacement fuel oil line is built as a closed loop covering about 6.4 km in the Belridge field some 17 km north of McKittrick and 80.5 km west of Bakersfield, CA.
The line is constructed with 6 inch grade b seamless pipe, 7mm wall thickness double jointed sections.  ARB, Inc was the primary contractor for the line and S&W Construction Co. applied the Hotclad protective tape under Raychem supervision.  Ditch was excavated to provide a minimum of 30" cover.
Double jointing was manual at a temporary rack that was moved along the ROW ahead of the pipe gang.  This was difficult at times due to the close proximity of the many wells and pumps. Sections were suspended from a sideboom tractor for delivery into the ditch and manually jockeyed into position, usually under one or more crossing lines.  Alignment and spacing was with a Dresser clamp and welding was performed in the trench.
Most of the trenching was with a backhoe but so many other lines intersected the ditch that cleanup under the crossings was frequently done with muscle power and shovels.  The route parallels a steam injection line for about 60% of the ROW distance.  Installation of the new fuel line was positioned a few inches to the side oft he steam line, using its heat to maintain the temperature of the hot oil thru-put.
The system is operated from a single pump station drawing its oil from adjacent storage tanks.  On an average of two week intervals, the tanks are replenished from the product treater where the associated water and sand is removed from the crude.
From the pump station, the oil is moved through a loop system which supplies the fuel to all steam generators in various sections of the field.  The crude leaves the station at 98.9C, dropping to 180F at the end of the loop which returns it to the supply tanks.  Laterals from the mainline supply the fuel to the fired boilers and the excess is returned to the pump station for reheating.  Constant circulation in the line is necessary to prevent 'jelling' of the high viscosity oil. 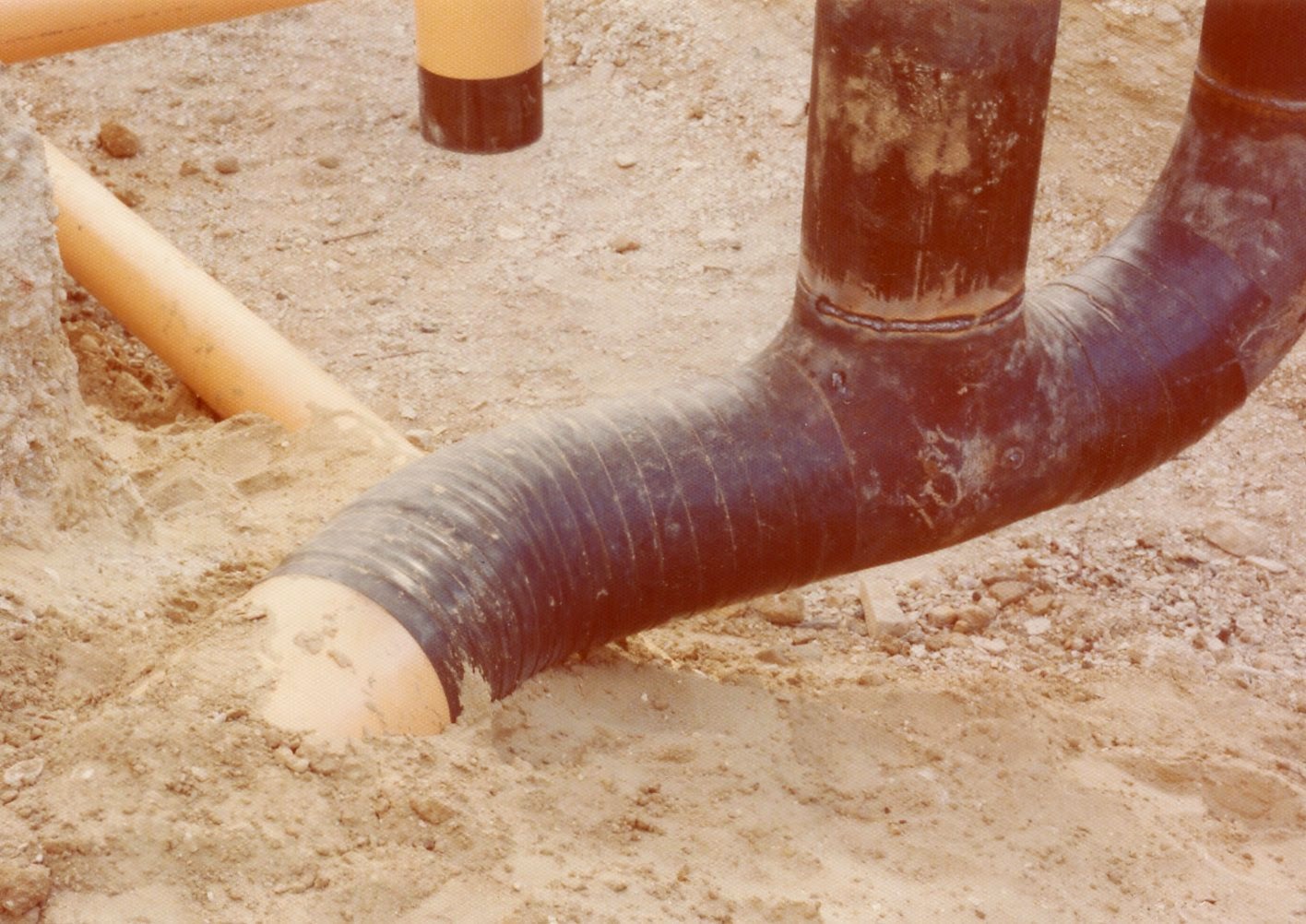 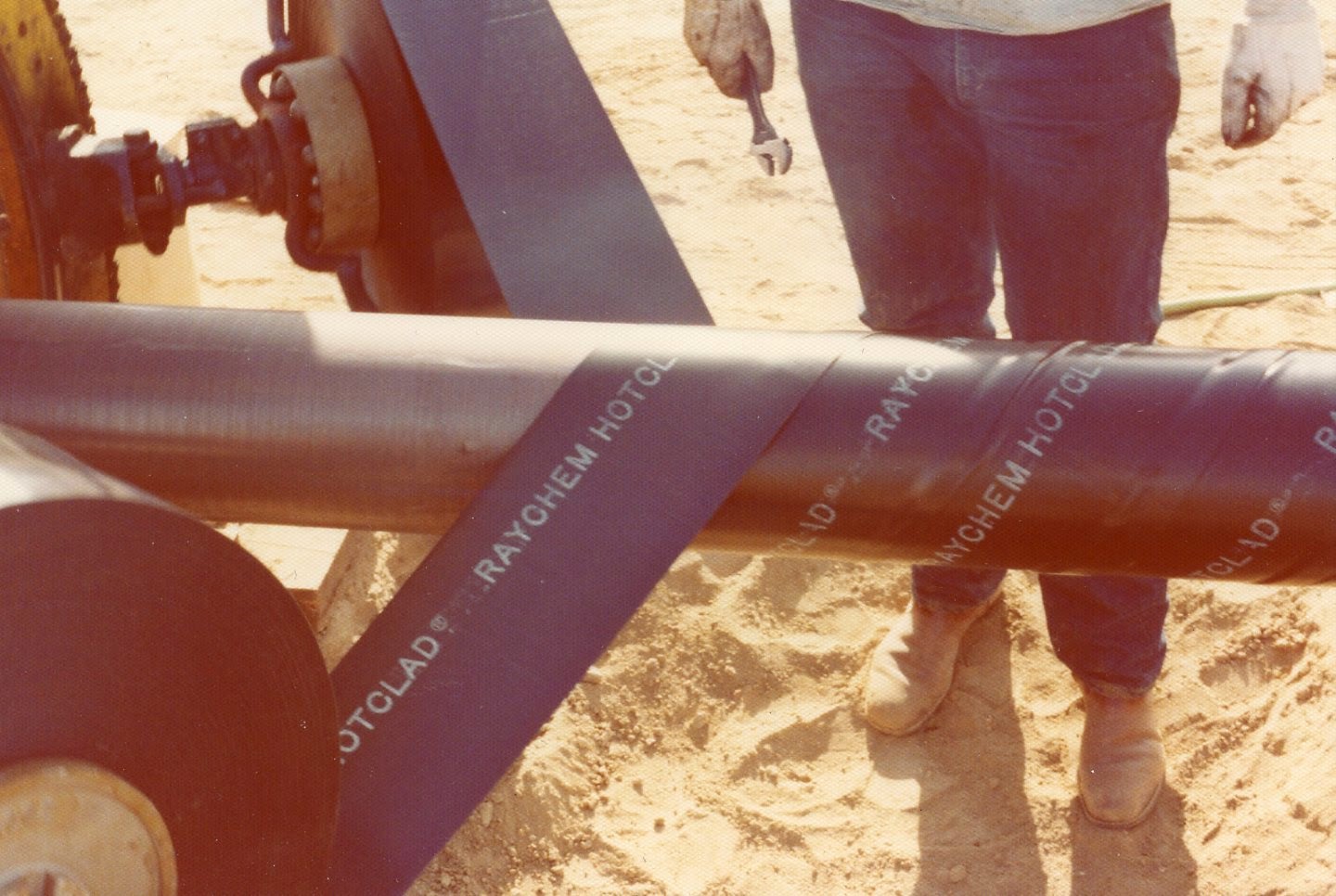 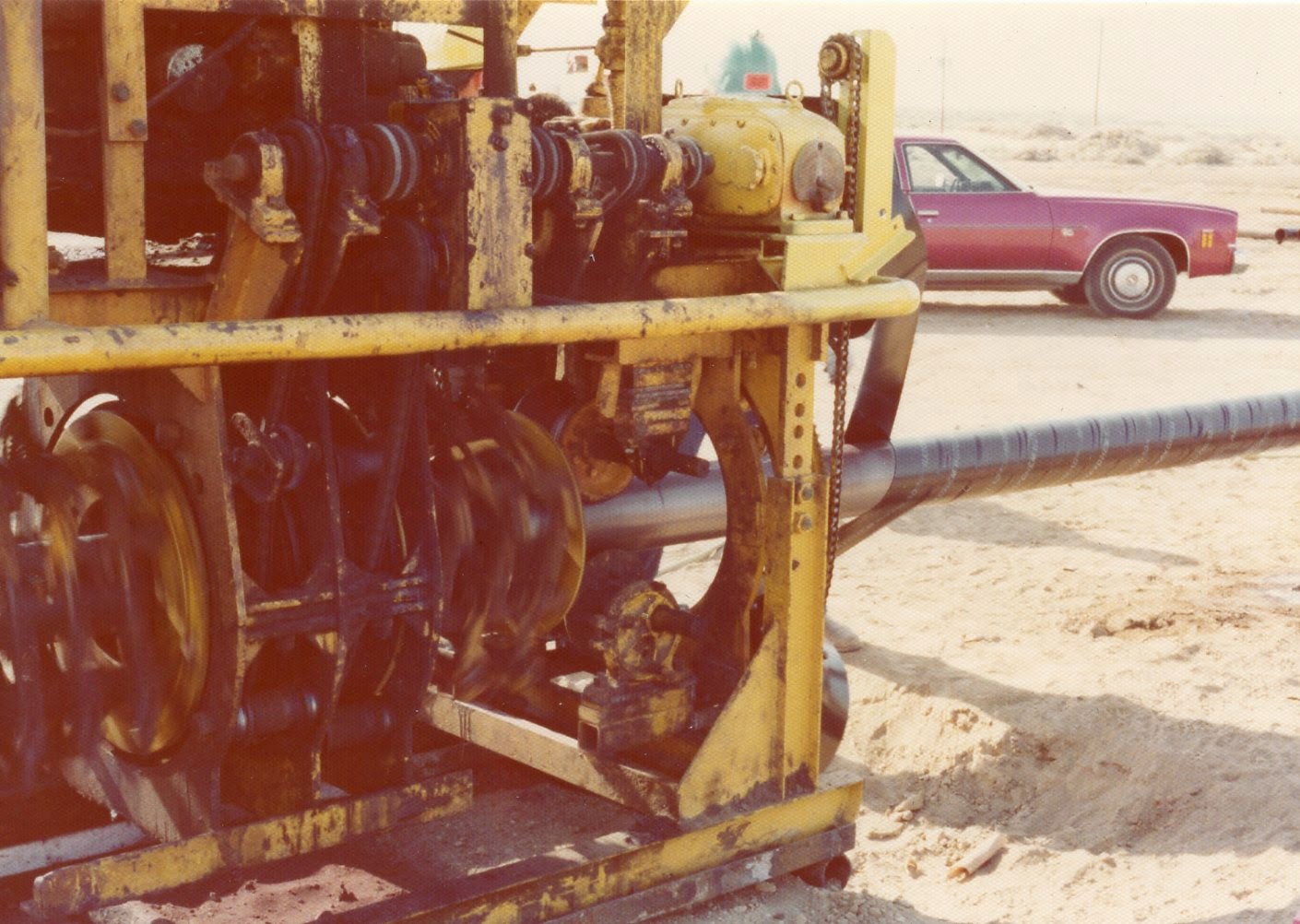 The pipeline is protected with Raychem's special Hotclad tape wound spirally onto the joints.  Shrink sleeves cover field weld areas.
The wrapping plant is simplicity itself, consisting of a pipe supply rack, a series of support roller stands, a propane pipe heater chamber, an over the ditch type tape machine, post heat chamber, water quench bath trough, a second series of rollers and a curing rack.  The equipment could easily be operated while mounted on a railroad flatcar or long flatbed trailer.  For the Belridge project, it was installed on the ground.  The region is an arid semi-desert and a level spot was not hard to find.  Air pressure was supplied from a portable compressor.
The pipe was shotblast cleaned to NACE white condition metal.  To prevent any intrusion of atmospheric corrosion, only enough joints were cleaned to meet the days run requirements.  Joints were then placed on the rollers and moved through the preheater where the pipe temperature was raised to 400F.
The wrapped pipe then passed through the radiant gas post heater which completed the job of bonding the tape to the hot joint then, through the water quench bath and out to the curing rack.  Wrapping was continuous.  Short steel nippled, fitted into the ends of each joint, guided the following joints through the production line.  At the far end, joints were separated and the wrapping cutback about 4" for field welding.
The new tape is composed of a 17 mil high density radiation cross linked polyethylene backing coated with a crystalline adhesive having a melt point above 100C or 212F.  The backing is shrinkable and in the post heater, this quality forces the adhesive to flow.
Field weld joints are protected with shrink sleeves.  Installation is with metal closure channels that slide over the rails (where the sides of the sleeves meet).  There is an overlap of the sleeve at the closure to insure a positive seal.  Internally, the sleeves are coated with the adhesive to bond it to the pipe.  The closure channel is flexible and will conform to the shape of the pipe under the sleeve.
Construction of the new fuel oil line began in late march 1976 and was completed in mid may.

As told to me by Stan Simpson:

This was right on the heels of the Trans Alaskan Pipeline.  Everyone was just getting back to their normal jobs and Paul Cook had appointed someone as "Tape Czar" whose job it was to go find new opportunities for this newly developed heat shrinkable tape wrapping technology.  Keep in mind:  the Arcticlad used in Alaska was not designed to be used at 100C.  It was a lower temperature product.

So anyway, this salesman goes ahead and sells the job even though there is no high temperature adhesive and there is no equipment around to install the product that doesn't exist yet.  What followed was a massive scramble in product development to create an adhesive that was rated to 100C and a scramble in equipment development to create the things necessary to install the product.  As they always seemed to do in those days - somehow - everything came together.  That Hotclad tape adhesive turned out to be the precursor to the adhesive that would later become used with Rayclad and the WPC120 products (both of which have become large revenue generators over the years).
Posted by SteveSimpson at 12:02 PM