Zip Ties to Hold Bumpers on a Bundled Directional Drill?

Zip Ties to Hold Pipe Bumpers on a Road Bore? 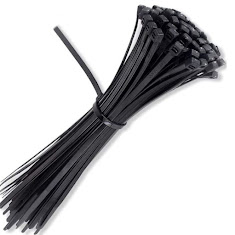 I've had an interesting week.  There is a pipeline project going on out there that is using zip ties as the primary method of keeping pipe bumpers on the pipeline.  In this particular case, two 12" pipelines are being dragged through the same bore hole at the same time.  A bumper is needed there for a variety of reasons, but most importantly:

In this case, I've had phone calls from an inspector on the line and from a QA employee who works for the end user.  In both cases the question was the same:  Do you think it is going to work if we have our bumpers secured with zip ties?  (not coincidentally; both people asked that their identities remain confidential of course).
My first response:  "WHAT???"
My second response:  "Are you serious?"
My third response:  "No, I don't think that is going to work."
Now, everyone who has experience with a directional drilling application understands that tremendous forces are going to be put on the pipe.  That is the reason that Powercrete DD is such a sought after product!  It has excellent abrasion resistance, penetration resistance, gouge resistance, etc.  When that pipe that is travelling under ground collides with rocks and roots; the Powercrete DD is tough enough to survive without a scratch.
When you're pulling muliple pipelines through the same hole; at the same time -- those forces are all magnified.  Those lines are bouncing around in that hole; and bouncing off of each other if a proper bumper system isn't used (see JSI's bumper system here).  Consider more than one very heavy section of pipe; consider the forces when that pipe 'bounces' off of a rock -- and anything used in that situation had better be tough.
Say you're pulling 24" OD pipe through a bundled bore (along with a 12" line).  That 24" OD pipe might way 100 plus pounds per foot.  If you have a bumper of some kind on that line every 20 feet - that means each bumper is responsible for 2000 pounds of weight!  Now add in the massive spikes in force when that line collides with a rock!  Consider that there might also be a 12" line in that hole!  There could me more than 1 extra line (the most we have seen is 11 lines in 1 hole!).
Those are incredible weights.
How much weight can a zip tie hold?  Keep in mind; even industrial zip ties are at most 1/2" wide (often 1/3" or less).  In my research, I do find a few zip ties that claim to hold 250 pounds and many more that claim to be able to hold 175 pounds or less.  If that 2000 pound figure that I cite up above (the weight of 20 feet of larger diameter pipe) for a stationary pipe; how much weight do those zip ties need to contain when that line bounces off of a rock; bounces off of another pipe; bottoms out in the bore hole as the pipe turns to head to the surface, etc.  Could you trust that to say 4 zip ties?  Absolutely not!!
Meanwhile JSI's Bore Bumper System is proven over the course of hundreds of bores representing many, many miles of bundled bores.  Our system utilizes a material with a tensile strength of greater than 2500 newtons.  A simple conversion indicates that can be in the neighborhood of more than 500 psi.  Our system on a 20" line would have ~90 square inches of material permanently bonded to that pipe surface.
These aren't even two system that can be compared.  More than likely the zip ties begin popping shortly after the bundle enters the earth.  Soon after the bumpers likely begin falling off.  Shortly after that, the pipe likely begins to collide with each resulting in damage to your factory applied coating.  And then finally, the pipe very likely reaches its permanent resting place; with two steel pipeline resting on one another.  As time goes by and wet/dry and hot/cold cycles reign for weeks, months and years; the very expensive factory applied coating you paid for is worn away and massive corrosion problems occur.  All because someone chose to trust a zip tie.
Posted by SteveSimpson at 2:52 PM